Are you a New User?

Araucaria araucana (commonly called the monkey puzzle tree, monkey tail tree, piñonero, or Chilean pine) is an evergreen tree growing to 1–1.5 m (3–5 ft) in diameter and 30–40 m (100–130 ft) in height. It is native to central and southern Chile and western Argentina.[2]Araucaria araucana is the hardiest species in the conifer genus Araucaria. Because of the longevity of this species, it is described as a living fossil. It is also the national tree of Chile. Its conservation status was changed to Endangered by the IUCN in 2013 due to the dwindling population caused by logging, forest fires, and grazing.[1]

The leaves of A. araucana 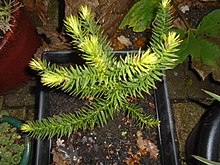 The leaves are thick, tough, and scale-like, triangular, 3–4 cm (1.2–1.6 in) long, 1–3 cm (0.39–1.18 in) broad at the base, and with sharp edges and tips, rather similar to the leaves of the unrelated succulent plant, Crassula muscosa. According to Lusk, the leaves have an average lifespan of 24 years[3] and so cover most of the tree except for the older branches.

The thick bark of Araucaria araucana may be an adaptation to wildfire.[4] 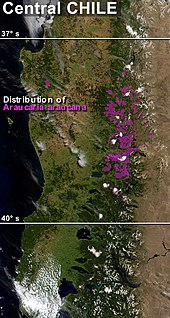 Distribution map of A. araucana in central Chile

Its native habitat is the lower slopes of the Chilean and Argentinian south-central Andes, typically above 1,000 m (3,300 ft). Juvenile trees exhibit a broadly pyramidal or conical habit which naturally develops into the distinctive umbrella form of mature specimens as the tree ages.[5] It prefers well-drained, slightly acidic, volcanic soil, but will tolerate almost any soil type provided it drains well.

Araucaria araucana is a masting species, and rodents are important consumers and dispersers of its seeds. The long-haired grass mouse, Abrothrix longipilis, is the most important animal responsible for dispersing the seeds of A. araucana. This rodent buries seeds whole in locations favorable for seed germination, unlike other animals.[6]

Araucaria araucana is a popular garden tree, planted for the unusual effect of its thick, “reptilian” branches with very symmetrical appearance. It prefers temperate climates with abundant rainfall, tolerating temperatures down to about −20 °C (−4 °F). It is far and away the hardiest member of its genus, and can grow well in western Europe (north to the Faroe Islands and Smøla[8] in western Norway), the west coast of North America (north to the islands of Haida Gwaii in Canada), and locally on the east coast, as well as Long Island, and in New Zealand and southeastern Australia. It is tolerant of coastal salt spray, but does not tolerate exposure to pollution.

The piñones are similar to pine nuts, but larger; these roasted seeds are 3 cm and 5 cm long, from two different cultivars.

Its piñones, or seeds,[7] are edible, similar to large pine nuts, and are harvested by indigenous peoples in Argentina and Chile.[9] The tree has some potential to be a food crop in other areas in the future, thriving in climates with cool oceanic summers, e.g., western Scotland, where other nut crops do not grow well. A group of six female trees with one male for pollination could yield several thousand seeds per year. Since the cones drop, harvesting is easy. The tree, however, does not yield seeds until it is around 30 to 40 years old, which discourages investment in planting orchards (although yields at maturity can be immense); once established, it can live possibly as long as 1,000 years.[10]

Once valued because of its long, straight trunk, its current rarity and vulnerable status mean its wood is now rarely used; it is also sacred to some members of the Mapuche Native American tribe.[11] Before the tree became protected by law in 1971, lumber mills in Araucanía Region specialized in Chilean pine. This species is listed in the CITES Appendix I as an endangered species.[12]

The silhouette of the araucaria is very recognizable and has become a symbol for the southern regions of Argentina and Chile. For example, araucarias appear on the coats of arms of Neuquén Province and Araucanía Region.

First identified by Europeans in Chile in the 1780s,[13][14] it was named Pinus araucana by Molina in 1782.[15] In 1789, de Jussieu had erected a new genus called Araucaria based on the species,[16] and in 1797, Pavón published a new description of the species which he called Araucaria imbricata (an invalid name, as it did not use Molina’s older species epithet).[17] Finally, in 1873, after several further redescriptions, Koch published the combination Araucaria araucana,[18] validating Molina’s species name. The name araucana is derived from the native Araucanians who used the nuts (seeds) of the tree in Chile. A group of Araucanians living in the Andes, the Pehuenches, owe their name to their diet based on harvesting of the A. araucaria seeds. Pehuen means Araucaria and che means people in Mapudungun.

The origin of the popular English language name “monkey puzzle” derives from its early cultivation in Britain in about 1850, when the species was still very rare in gardens and not widely known. Sir William Molesworth, the proud owner of a young specimen at Pencarrow garden near Bodmin in Cornwall, was showing it to a group of friends, one of them – the noted barrister and Benthamist Charles Austin – remarked, “It would puzzle a monkey to climb that”.[19] As the species had no existing popular name, first “monkey puzzler”, then “monkey puzzle” stuck.[20]

The nearest relative found is Araucaria angustifolia, a South American Araucaria from Brazil which differs in the width of the leaves. Members of the genus Araucaria in the Pacific Islands and Australia include Araucaria cunninghamii, hoop pine, Araucaria heterophylla, the Norfolk Island pine and Araucaria bidwillii, bunya pine.

The recently found ‘Wollemi pine’, Wollemia, discovered in southeast Australia, is classed in the plant family Araucariaceae. Their common ancestry dates to a time when Australia, Antarctica, and South America were linked by land — all three continents were once part of the supercontinent known as Gondwana.

There are no reviews yet.

© Naija Palm Trees. All Rights Reserved.
MADE WITH BY: Bashiru Ismail Babatunde